Q & A on Adult ADHD: What Is Personality, What Are Symptoms?

Continuing with last month's theme of sharing questions and my answers from CHADD's Ask the Expert chat, here is a two-part question from a reader named Matt.


I welcome your responses to both Matt's questions and my answers.

1. How do you separate ADHD from the person? Because it is neurological, it just doesn't seem possible. It would be like separating sexual orientation from a person.

Hi Matt,
Boy, that’s a question for the philosophers! But I’ll give it a try. It’s true that, especially with late-diagnosis adult ADHD, you often hear comments such as “I don’t know if I have ADHD or if I am ADHD.”
A 30-something man with ADHD recently told me that his personality is the Life of the Party. But, I asked him, is that really his personality? Or, could it be a behavior developed many years ago because he was unable to follow the many conversational threads at a party?

Did an innate gregariousness and sense of humor lead to his love of joke-telling and being the center of attention? Or, was it simply a survival skill, a way of maintaining interest? When I put it that way, it gave him pause. “My friends don’t like it when I take medication,” he said, “because then I’m not as entertaining.” Personally, I’d have to wonder about such friends’ interest in him as a person. Maybe he should wonder, too.
Yes, the world needs Life of the Party types, and maybe that truly is a part of this man’s personality. But what if this behavior isn’t really his authentic personal expression but an unconscious biological imperative (that is, long-unrecognized ADHD)? More importantly, what if it thwarts his desire to connect more intimately with other people instead of simply being an entertainment source kept at arm's length?
The exciting thing about pursuing ADHD treatment, in my opinion, is that you get a chance to see what are personality issues and what are ADHD symptoms. Knowing that a troublesome habit is really a common symptom can go a long way towards helping you to be more self-accepting and less anxious or defensive. Otherwise, when you judge yourself harshly for constantly losing things (for example), never knowing that this is a typical untreated ADHD trait, it can chip away at your happiness and distort your self-perception. Your better qualities can get so buried in shame, you lose sight of them completely.
So, the bottom line: Yes, I think you can distinguish the person from symptoms that frustrate them and sabotage their true personalities. I’ve seen it happen and heard the stories too often to doubt it. People say they were
acting in ways they didn’t intend to, so it doesn’t seem like "personality" to me.
Will the newly diagnosed person often need help, though, in making the transition from an old way of being in the world? Absolutely. That’s what cognitive-behavioral therapy for ADHD is all about: changing the way one views the world and oneself, given the new abilities and insights of ADHD diagnosis and medication. 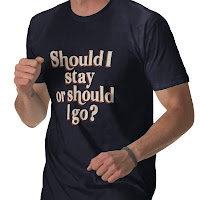 Now for Matt’s next question:

2. How do you know when to give up and move on? I have struggled for many years with my marriage to an ADHD person. There are just so many issues.

Yes, indeed. There can be many issues, and they vary for each couple. Again, this is a big question that, ultimately, only you and your spouse can answer.
In general, the ability of ADHD-affected couples to improve their relationship depends on many factors, including both partners’ capacity as cooperative problem-solvers, the severity of ADHD symptoms and comorbidities and how long they have affected the relationship, and respective expectations of marriage. To name only a few.
Only one thing seems for sure: If your ADHD partner has not fully pursued ADHD education and treatment and if you have not educated yourself thoroughly about ADHD and tried to meet your partner halfway, you’ll never know how much better life can be.
What do you think? I welcome your answers to Matt's questions.
Posted by Gina Pera