Is It "Miscommunication"—or Could It Be Adult ADHD? 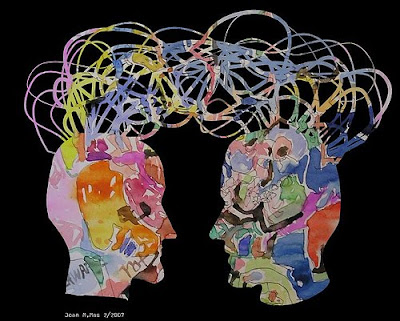 With a warm smile and a kiss, Diane welcomed fiancé George at her front door and then noticed fresh mud on his shoes. In a pleasant tone of voice, she asked him to please leave his boots on the stairs.

Puzzled, he said, "Your suits stare? Huh? What on earth are you talking about?" Despite her clarification, George remained convinced that Diane had said exactly that. Moreover, she'd said it with that tone (presumably, the disapproving kind).

It wasn't this pair's first tangled communication. In fact, it happened so often, George had his hearing checked but it seemed fine. Their couples therapist suggested that George might bear deep-seated psychological resistance to listening to Diane.

Can You Hear Me Now?

Fortunately, George's ADHD diagnosis came just as these "miscommunications" reached fever pitch. He and Diane felt relief when the cognitive therapist explained how ADHD has a common traveling companion called Central Auditory Processing Disorder (CAPD). Briefly, it can cause a person to misinterpret content and even tone of voice (more details about CAPD in a minute). The therapist provided the couple strategies for enhancing communications, noting that stimulant medication can often help "strengthen the signal."
What signal is this? The one that travels from Point A (the ear, where sound waves enter) to Point B (the brain's auditory processing cortex, where sounds are interpreted and given meaning). (See illustration below.)
This journey is made possible thanks to brain chemicals called neurotransmitters. If certain neurotransmitters are in short supply, messages won't get through or arrive intact. (It's sort of like using a dial-up modem when you're trying to transmit a big  file: Data-corruption happens.)
In addition to weak signal strength, consider other ADHD-related neurobehaviors that might be contributing to your Tower of Babel Twosome: Distractibility, inattention, poor working memory and even difficulty reading social cues, including facial expressions. As one young man with ADHD put it (in a video produced by ADHD educator Chris Dendy): "It's like living life listening to people speaking a language that you don't understand, with no translation available."
The stress of knowing that communications are going badly only makes things worse for the adult with ADHD, especially when it comes to talking about personal issues, according to my friend Carl, who along with his wife was diagnosed eight years ago. "With stress, ADDers tend to get 'brainlock' and realize there's no hope of expressing themselves and having a 'real' conversation the way you want," Carl says. "So, they frantically search for the right thing to say to make it go away, since they can't express what they're really feeling. They can't even define or focus on what they're feeling, let alone talk about it to anyone else."
Then there's my friend Mary, who is heartbroken about the state of her marriage: "I just don't know how to talk to my husband anymore. If we make an agreement, he forgets it or complains about it, makes an excuse to break the agreement, or accuses me of remembering it incorrectly."

Recently, I attended a lecture where a psychiatrist (who both has ADHD and treats it) demonstrated how ADHD can challenge one's ability to retain verbal information. First he asked for a show of hands from everyone diagnosed with ADHD or entertaining the possibility. The entire group of about 25 raised their hands. Then he reeled off a short bio (note: details have been changed):

“My name is John Michael Smith. I was raised in Philadelphia, Pennsylvania. Later, I attended medical school at the University of California, Los Angeles. Now I live in Palo Alto.”

“Okay now,” he said. “Who can tell me my middle name?” Two raised hands.

“Who can tell me where I attended medical school?” One hand.

"Where do I live?" Six hands shot up. (It might have helped that the meeting was held in Palo Alto.)

“Who can tell me where I grew up?” Two hands raised, tentatively.

"So you see," he concluded, "when you think you are having communication problems, what you are possibly having is a hard time remembering details from one sentence to the next."

CAPD and ADHD: One and the Same?

Given all this, I can't figure out why these challenges are commonly identified in children as CAPD yet when it comes to adults with undiagnosed ADHD, the challenges are typically called …. what exactly? Passive-aggression? Obstreperousness? Oppositionality? Sometimes. Until you grow old enough to be evaluated for hearing problems and fitted with a hearing aid. Trouble is, your "hearing" might be just fine.
Read these characteristics of CAPD (from the National Institute on Deafness and Other Communication Disorders), and notice how similar it is to ADHD (some experts doubt that these commonly co-existing conditions are, in fact, separate entities):
• Has trouble paying attention to and remembering information presented orally
• Has problems carrying out multi-step directions
• Has poor listening skills
• Needs more time to process information
• Has low academic performance
• Has behavior problems
• Has language difficulty (e.g., they confuse syllable sequences and have problems developing vocabulary and understanding language)
• Has difficulty with reading, comprehension, spelling, and vocabulary.
In this short blog post, I've touched only the surface of how, when it comes to ADHD, hearing well doesn't always mean being able to listen well.

For Partners of Adults with ADHD:


For Adults with ADHD:


When Symptoms are Moderate to Severe
Sometimes, strategies are simply not enough; medication might prove most helpful in kicking the "transmission signal" up a few notches. Consider this before-and-after story:

"My boyfriend has been taking a neurostimulant medication for about a month now, and the biggest difference we've noticed is that we are able to discuss things without the big explosions of emotion. He's much less dramatic in his expressions of self-hatred or anger, which we've learned came about mostly because he was losing focus and subconsciously boosting adrenaline to re-capture focus, plus feeling badly that he couldn't keep paying attention. He used to lose the thread so quickly and then automatically go off on a more stimulating (to him) tangent, leaving me in the dust and getting angry if I tried to bring him back to the subject.

"Mind you, previously our discussions wouldn't be particularly demanding of most people; they were normal discussions that couples have every day. Now he's no longer stomping out of the room mid-conversation to sulk. No more 'misremembering' later the agreements we made. No more going completely silent while ignoring what I'm saying because he's busy obsessing about how he's such a terrible person and how he's letting me down."

-------
Can you relate? Can you share some strategies? We'd love to know about them! Please share your comments below.

------
Note: Psychologist Arthur Robin and I will present a workshop on October 10, called, "Relationships: How To Succeed in Marriage with AD/HD" as part of the Annual CHADD conference taking place in Cleveland in October. I hope to see you there!

And, to the kind 80-year-old gentleman who introduced himself to me at the CHADD Anaheim conference as a fan of this blog, thank you so much! Wonderful to meet you! And please keep passing along Adult ADHD awareness to your friends. :-)